Shopping Cart
Your Cart is Empty
Quantity:
Subtotal
Taxes
Shipping
Total
There was an error with PayPalClick here to try again

Thank you for your business!You should be receiving an order confirmation from Paypal shortly.Exit Shopping Cart

In Memory of Dave Connelly - A Fallen Warrior

Dave first started training with us back in 1992/93 when he joined the first karate club that I started here in Raymond Terrace. I honestly don't remember him well from that time and it wasn't until he came back to start training again in 2011 that that I really got a chance to get to know him. I remember him walking in with Nathan & thinking "what have we got here".

Dave had the number 1 haircut and about a 4 day growth on his face & Nathan had more tattoos than your average bikey. Dave told me only recently that he remembered thinking "I hope he remembers us & doesn't throw us out!" That was the first lesson that Dave started teaching me, never judge a book by its cover. When they coined the phrase "rough diamond", they must have been thinking about our Dave.

Dave was a very enthusiastic student and it was not uncommon to have just he & Nathan in the class during those early days at the YMCA, something that Dave was quite happy about. As I got to know Dave I realised that there was more to him than met the eye. I discovered that he was very well read. I expected him to know all about the Saturday form guide and to perhaps have a subscription to people magazine. Turns out he'd read more books than you could poke a stick at, often several times and could sit down & have in depth discussions about the storylines, the authors, or the style of writing. He'd often turn up with books to lend me and it was Dave who got me started on the Game of Thrones series. One of his favourites. He'd worked out the secrets of the story but refused to tell me. I had to discover it on my own. Lesson number 2.

Down at the Dojo we were convinced that, at some stage, Dave had driven blind folded & at high speed down the main street of China Town. He would often turn up with skin off or limping from some misadventure, whether it be falling off his pushbike late at night, kicking his toe on something or, occasionally, he couldn't quite remember how he'd done it. For most people that would mean a night or two off from training & kicking back in front of the telly, not our Dave. He'd come in regardless and sit up the end of the dojo to watch & take it all in. I'd be demonstrating a move and look over to see Dave deep in thought and obviously going thru the moves in his head, next minute he'd be up doing it on his own as best he could. If he saw one of the new students struggling with something, and I was dealing with someone else, he'd advise them from the sidelines for a minute before hobbling over to try to help them, he couldn't stop himself.

Dave was never one to volunteer too much information about himself up front, but as our friendship grew, I discovered that he had travelled quite extensively around Australia, working in various towns doing whatever jobs he could find to support his travels. He let slip one day that Billy Connelly was his uncle and he played me along for a while before informing me that his uncle was indeed Billy Connelly, just not the one I was thinking of, I believe he'd managed to get himself a few free beers with that one over the years. He had also travelled back to Scotland and, between the stories that Dave told me regarding his travels and a few that his family & friends have shared with me, I'm sure that he made many friends along the way as he gathered life experiences to slowly build the person we all came to know & love.

In the dojo Dave always gave it his all. As I lead the class thru one exercise or another I would look up towards Dave's end of the line to see 2 things. Dave focusing whole heartedly on the task at hand and a sizeable pool of sweat on the floor. Eventually we had to ask him to keep a towel handy to wipe himself down. Whenever we paired up for partner work, if Dave trained with a junior grade he would do his best to help them, taking his time and encouraging them. I've had a number of students tell me how much they benefitted from working with Dave when they were starting out. When he paired up with a senior grade he'd go hard while at the same time focusing on the finer points of whatever we were doing. He would often come up to me with a gleam in his eye to ask about something he'd realised was an important aspect or a link within something we were doing. Sometimes I would use Dave to demonstrate a move to the class. The first time I did a throw on him, instead of landing prone on the mat, as he should have, Dave nimbly spun & rolled to stand up facing me with a cheeky grin on his face. So started my ongoing lesson from Dave on how to put someone on the ground & keep them there. We never quite finished that lesson.

He was an invaluable member of our KU family and was affectionately known as "Ranga Dave". Always upporting any event if he could, always friendly & helpful to the junior grades and always respectful and polite to his peers and seniors. He had an easy going manner, and I don't recall ever seeing him angry. In short, what a real martial artist should be and a role model to us all.

Dave will be greatly missed by all of us, whether it be his ready smile, his compassion towards others or the occasional late night phone call or text to discuss such important issues as a technique we'd been working on, a book, or a movie he'd either just seen or was in the middle of watching, and it's going to take a long time to get used to not seeing him in his spot in the line up. But I think one of things I'm going to miss the most is being at the dojo waiting for students to arrive and seeing Dave walking thru the front gate with a look on his face that would scare a Rottweiler only to have him break into a grin as he stepped inside to say "G'day Sensei, how are ya?"

At the end of a class there is a Japanese phrase that is usually said by the student to the instructor which translates to "Thank you very much for teaching me", but in this case the teacher has certainly been the student, so till we meet to train together again Dave, Domo arigato gozaimasu. 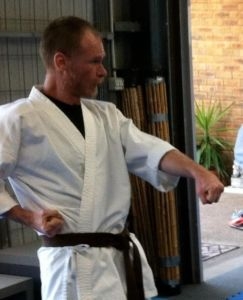 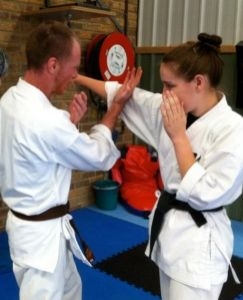 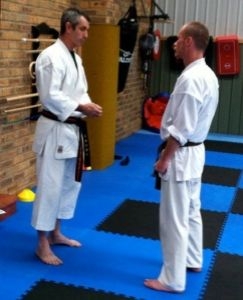